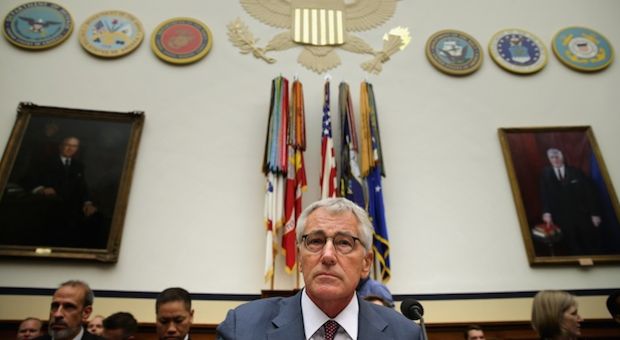 Defense Secretary Chuck Hagel prepares to testify before the House Armed Services Committee about the ongoing threat from the Islamic State of Iraq and the Levant (ISIL) during a hearing in the Rayburn House Office Building on Capitol Hill September 18, 2014 in Washington, DC. At the request of President Barack Obama, the House of Representatives passed legislation Wednesday that authorizes the training and arming of Syrian rebels to confront ISIL. Chip Somodevilla/Getty Images

Congress approves President Barack Obama’s funding request for Syrian rebels battling ISIS. The votes in both houses featured rare, bipartisan agreement ahead of midterm elections. Federal prosecutors indict a New York man on charges he tried to provide material support to the Islamic State. A new government report finds security flaws at the Healthcare.gov website that could jeopardize consumers’ personal data. The Kansas Supreme Court orders a Democrat off the ballot, which may affect control of the Senate in the fall elections. And a fourth player is suspended by the NFL over family violence. Guest host Elise Labott and guests discuss the week’s top domestic news stories.

In light of the NFL’s handling of domestic abuse allegations among several of its players, a caller asks whether corporal punishment is a cultural norm in the South. Jeff Mason of Reuters said the accusations have opened a national dialogue about “what is and is not OK” when it comes to discipline. Jonathan Weisman of The New York Times defended the region, saying that as someone who grew up in the South, there’s no acceptable norm on physical discipline.