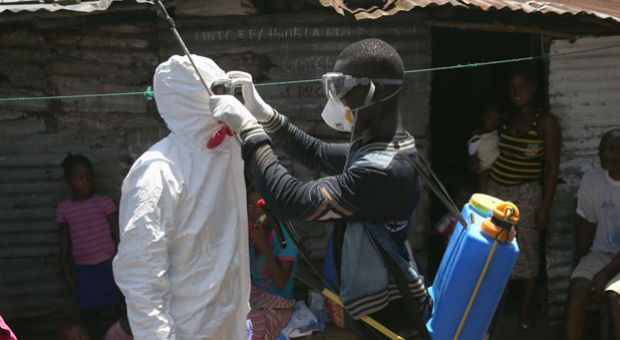 Health workers suit up in protective clothing (PPE), before taking people suspected of having Ebola to a re-opened Ebola holding center in the West Point neighborhood on October 17, 2014 in Monrovia, Liberia. The World Health Organization says that more than 4,500 people have died due to the Ebola epidemic in West Africa with a 70 percent mortality rate for those infected with the virus. (John Moore/Getty Images)

West African countries continue to fight the largest outbreak of Ebola in history, which has now claimed more than 4,500 lives. A shortage of doctors in many of those countries continues to be a major challenge. Here in the U.S., two Ebola patients are recovering at hospitals in Maryland and Georgia, and a lab worker who had boarded a cruise ship tested negative for the virus. President Barack Obama appointed an Ebola “czar,” while the Pentagon readied a team of 30 military doctors to assist hospitals. In Congress, many lawmakers continue to call for a West Africa travel ban. Diane and guests discuss the latest international and domestic efforts to confront the Ebola outbreak.