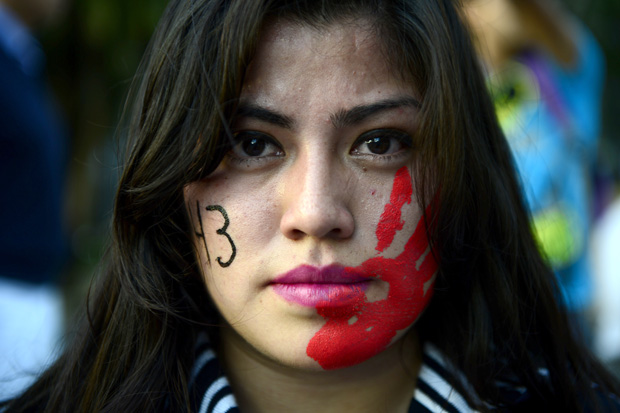 A woman participates in a protest demanding the Mexican goverment the appearence of 43 missing students in Mexico City on November 5, 2014. The arrest on the eve of Guerrero state ex-mayor and wife team suspected of masterminding the disappearance of the students last September raised hopes Wednesday that authorities can finally track them down -- dead or even alive. RONALDO SCHEMIDT/AFP/Getty Images)

President Obama says he will seek authorization from Congress for the military campaign against the Islamic State. That could lead to a heated debate over the nature of the latest U.S. involvement in Iraq and Syria. President Obama reported writes a secret letter last month to Iran’s supreme leader. In it, he seeks to link cooperation in the fight against ISIS to a nuclear deal. While Ebola loosens its grip on Liberia, a new outbreak hits Sierra Leone. And a Mexican mayor and his wife are arrested in the disappearance of 43 three students. A panel of journalists joins Diane for analysis of the week’s top international news stories.