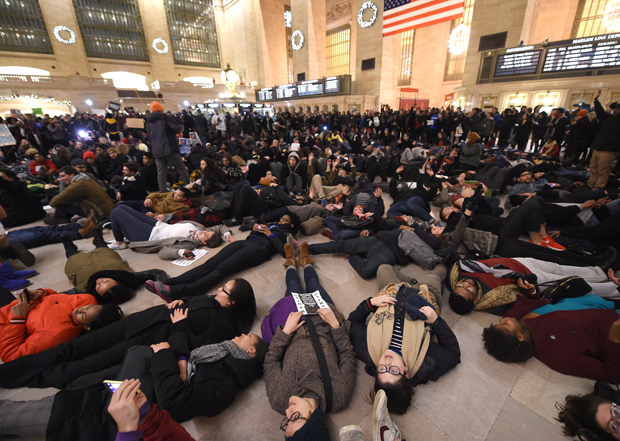 Protestors lay down in Grand Central Station during a protest on December 3, 2014 after a grand jury decided not to charge a white police officer in the choking death of Eric Garner, a black man, days after a similar decision sparked renewed unrest in Missouri. Eric Garner died after being placed in a chokehold by New York police Officer Daniel Pantaleo while being arrested on suspicion of selling untaxed cigarettes in Staten Island. TIMOTHY A. CLARY/AFP/Getty Images

The U.S. economy added more jobs in 2014 than any year since the 1990s, according to latest numbers. A New York grand jury’s decision not to bring charges in the choking death of Eric Garner spurs another night of protests nationwide. A Federal probe into the Cleveland police department finds a pattern of excessive force against civilians. Seventeen states, led by Texas, file a federal lawsuit to block president Obama’s immigration order. The Supreme Court hears a landmark pregnancy discrimination case. And Ashton Carter is set to be the next Secretary of Defense. A panel of journalists joins Diane for analysis of the week’s top national news stories.

After a grand jury failed to indict the officers involved in the choking death of Eric Garner, our panel takes a look at what we can expect from police behavior, protests and a federal investigation.

As President Barack Obama calls for $75 million to fund 50,000 body cameras for police departments across the country, our panel takes a look at the arguments for and against the devices.

From The Blog: What Happens To Eric Garner's Case Now?

From The Blog: What's Next For Eric Garner's Case? - The Diane Rehm Show

More than 220 people were arrested overnight in protests in New York City, the second such night of protests after a grand jury did not indict the officers involved in the choking death of Eric Garner.