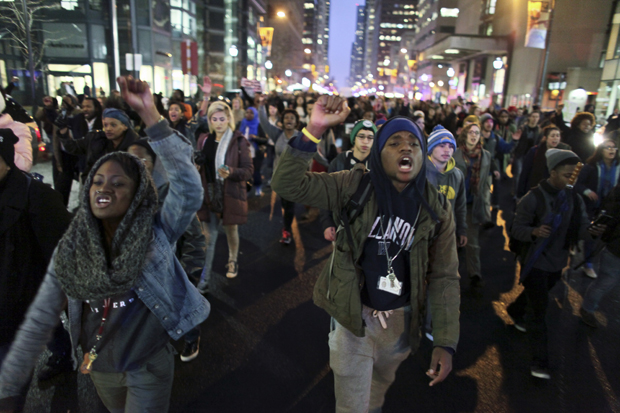 People march along Market Street as they participate in a demonstration, Wednesday Dec. 3, 2014, in Philadelphia. The crowd, protesting the deaths of two unarmed black men at the hands of police, rallied at the train station and marched through downtown before disrupting a tree lighting ceremony at City Hall. Getty Images

More than 220 people were arrested overnight in protests in New York City, the second such night of protests after a grand jury did not indict the officers involved in the choking death of Eric Garner.

What happens now is anyone’s guess: The U.S. has ordered a civil rights inquiry into the case, and protests are expected to continue across the country this weekend.

“I think there used to be this notion that a gun was a person’s best form of self defense, but maybe now it’s a phone with a video camera,” Bloomberg’s Margaret Talev said on Friday’s Domestic News Roundup.

One action that appears to be moving forward: Police body cameras. President Barack Obama called for $75 million to fund 50,000 body cameras for police departments across the country.

But will they actually help? Our panelists look at the arguments for and against the technology in this video.

For more: Tune in Dec. 8 as we look at new efforts to reform police procedures.