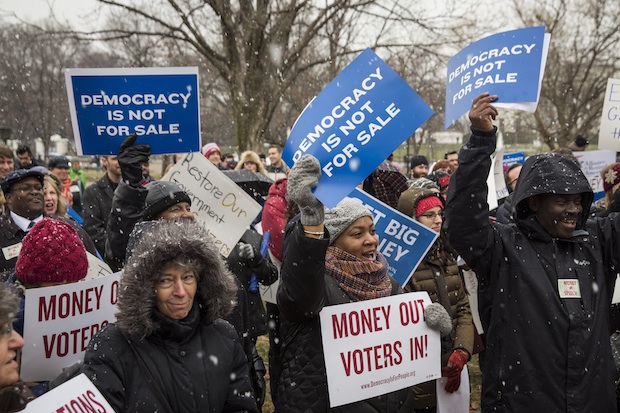 Attendees hold signs and cheer Jan. 21 during a rally calling for an end to corporate money in politics and to mark the fifth anniversary of the Supreme Court's Citizens United decision at Lafayette Square, near the White House in Washington, D.C. Drew Angerer/Getty Images

House Republicans back away from a controversial abortion bill after some G.O.P. women raise objections. President Obama visits a pair of red states to pitch economic proposals outlined in his State of the Union Address. The Senate begins debate on revising the “No Child Left Behind” education law. Vice President Biden says he may challenge Hillary Clinton in 2016. Protesters disrupt the Supreme Court on the fifth anniversary of the Citizens United decision. And the Justice Department reportedly won’t pursue civil rights charges against Ferguson, Missouri police office Darren Wilson. A panel of journalists joins guest host Susan Page for analysis of the week’s top national news stories.

Video: What's Next For Ferguson, Missouri?

Law enforcement officials said this week that no civil rights charges are expected to be brought against Darren Wilson, the Ferguson, Missouri police officer who fatally shot 18-year-old Michael Brown.

“I think we knew that going into the case,” Walter said.

Still, an inquiry into how the department as a whole handled the case is still open, and could bring big changes for policing.

Watch our panel discuss what’s next below.