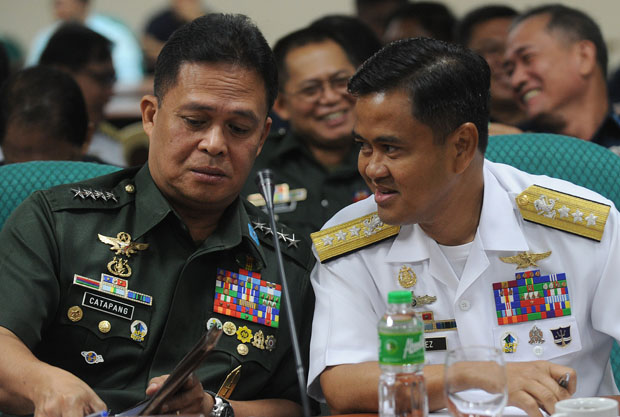 Gen. Gregorio Pio Catapang, Chief of Staff of the Armed Forces of the Philippines, talks to Vice Admiral Alexander Lopez during a Senate Inquiry of the disputed islands at the South China Sea in Manila JAY DIRECTO/AFP/Getty Images

The European Union proposes a quota system to distribute migrants throughout its member states. Asian countries meet today over their own migrant crisis. Iraqi soldiers fight alongside Shiite militias in an attempt to retake Ramadi from ISIS. Verbal sparring intensifies between China and the U.S. over man-made islands in the South China Sea. The Vatican calls Ireland’s vote to approve same sex marriage a “defeat for humanity.” And FIFA pushes ahead with a scheduled presidential election amid the fallout over corruption charges. A panel of journalists joins Diane for analysis of the week’s top international news stories.