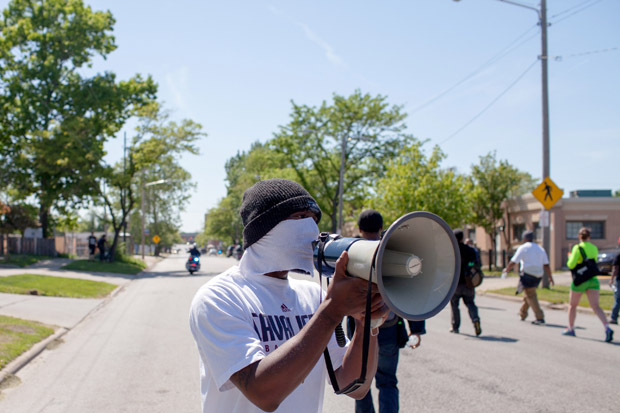 This May 23 photo shows people marching in protest to the Cuddell Recreation Center, where Tamir Rice was killed, in reaction to Cleveland police officer Michael Brelo being acquitted of manslaughter charges. Activists are now asking the court to order the arrest of the officer. Photo by Ricky Rhodes/Getty Images

House Republican leaders and President Barack Obama scramble to win over lawmakers ahead of critical trade votes Friday. A Cleveland judge says there is enough evidence to charge police officers in the killing of a 12-year-old boy. Jeb Bush shakes up his political team as he prepares for a likely presidential run. Former President Bill Clinton says he won’t give paid speeches if his wife wins the White House. Former House Speaker Dennis Hastert pleads not guilty to charges of bank fraud and lying to the FBI. And Florida’s new abortion rule requiring a 24-hour wait faces legal challenges. A panel of journalists joins Diane for analysis of the week’s top national news stories.

Republican leaders are worried the Bush name and legacy will discourage voters from voting for Jeb Bush in the GOP primaries. What will it mean for his campaign?

Video: A Look At Obama's Legacy