A Presidential Trip To Alaska And Efforts To Address Climate Change

A Presidential Trip To Alaska And Efforts To Address Climate Change 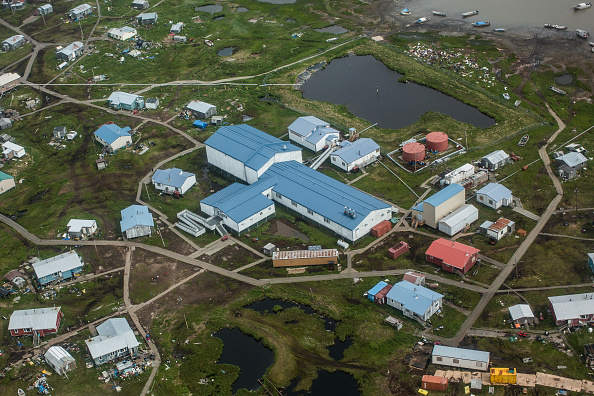 The village of Newtok is seen from a plane June 29, in Newtok, Alaska. Because of rising waters and climate change, the area's native Yupik population is being relocated nine miles away. Andrew Burton/Getty Images

President Barack Obama arrived in Alaska yesterday on a visit aimed at highlighting the need for urgent action on climate change. The trip takes him from Anchorage to the Arctic, where he will become the first sitting president to visit the region. Along the way, the president is meeting with Native Alaskans, touring a glacier that’s melted more than a mile in recent years, and visiting an Arctic town that has undergone serious erosion. Supporters of the president’s efforts say Alaska is the “canary in the coal mine” of global warming with rising temperatures, melting permafrost and wildfires. But critics say these warnings are exaggerated and that Alaska should be able to decide what to do with its own natural resources, including drilling offshore for oil and gas. And even some of the president’s own supporters question the administration’s recent decision to grant permits for Arctic drilling. We discuss the president’s trip to Alaska, critics on the right and the left, and what it all means for efforts to combat climate change.