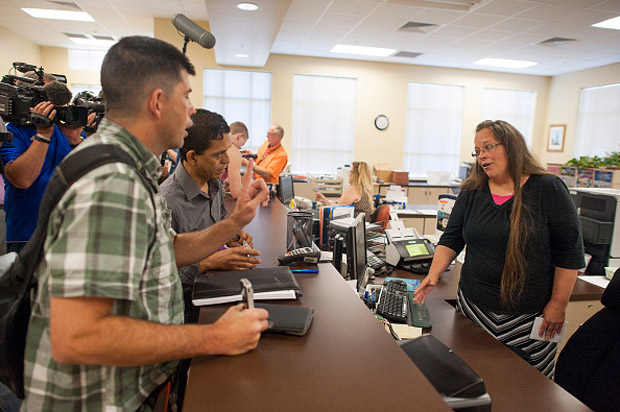 Robbie Blankenship stands next to his partner of 20 years, Jesse Cruz on Sept. 2 as they try to get a marriage license from Rowan County Clerk of Courts Kim Davis at the County Clerks Office. Ty Wright/Getty Images

The U.S. economy added 173,000 jobs last month, fewer than expected. But at 5.1 percent, the unemployment rate is the lowest it’s been since April 2008. President Barack Obama wins critical backing for the Iran nuclear deal as the August congressional recess nears an end. A county clerk in Kentucky is in jail after refusing to issue same-sex marriage licenses. A former staffer says he will invoke the Fifth Amendment to avoid testifying about Hillary Clinton’s State Department emails. Donald Trump pledges loyalty to the Republican Party. CNN amends its debate criteria, making space on the stage for candidate Carly Fiorina. And Pope Francis says he will make it easier for the Roman Catholic Church to forgive women who have had abortions. A panel of journalists joins guest host Tamara Keith of NPR for analysis of the week’s top national news stories.