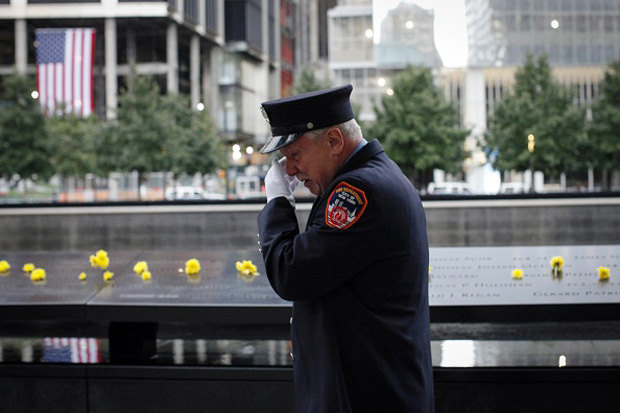 A member of the New York Fire Department reacts after he placed a flower on the 9/11 memorial on Sept. 11, 2015. KENA BETANCUR/AFP/Getty Images)

Senate Democrats hand President Barack Obama a foreign policy victory, blocking a GOP resolution to reject the Iran nuclear agreement, but House Republicans continue to fight the deal. The likelihood of a government shutdown becomes more real. The Justice Department pledges to get tough on white-collar criminals. CNN sets its lineup for next week’s Republican presidential debate. Police officers charged in the Freddie Gray case will be tried in Baltimore. And America marks 14 years since the Sept. 11 attacks. A panel of journalists joins guest host Susan Page for analysis of the week’s top national news stories.

Video: Will We See Another Government Shutdown?

Video: Will The Justice Department Crackdown On White-Collar Crime Make A Difference?