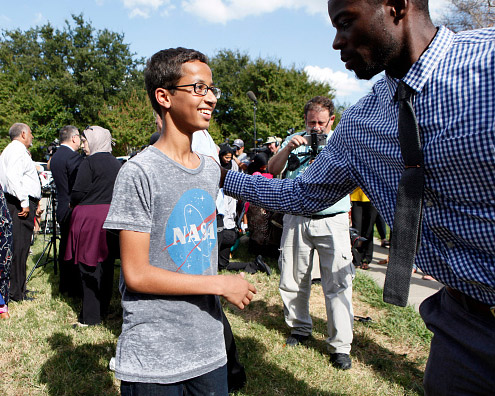 Fourteen-year-old Ahmed Ahmed Mohamed is greeted by a supporter during a Sept. 16 news conference on in Irving, Texas. Mohammed was detained after a high school teacher falsely concluded that a homemade clock he brought to class might be a bomb. Ben Torres/Getty Images

The Federal Reserve holds off on a short-term interest rate hike. But Fed chair Janet Yellen leaves the door open for an increase later this year. A deadline in Congress passes on the Iran deal, but another looms as Republican leaders try to avert a government shutdown over Planned Parenthood. General Motors agrees to a settlement for its failure to fix defective ignition switches that killed more than 120 people. And President Obama extends a White House invitation to a Texas high school student whose homemade clock got him arrested. A panel of journalists joins guest host Susan Page for analysis of the week’s top national news stories.

Video: Would Ahmed Mohamed Have Been Arrested If He Was White?

A listener writes: “Plain and simple: If he were a white kid named Mark and not a brown kid named [Ahmed] Mohamed, he would have gotten an ‘atta’boy’ from his teacher for building the clock and not handcuffs for being a ‘security threat.'”

Video: Will The Government Shut Down Oct. 1?

Congress is nearing its funding deadline. Can the House and Senate work together to avoid a shutdown?