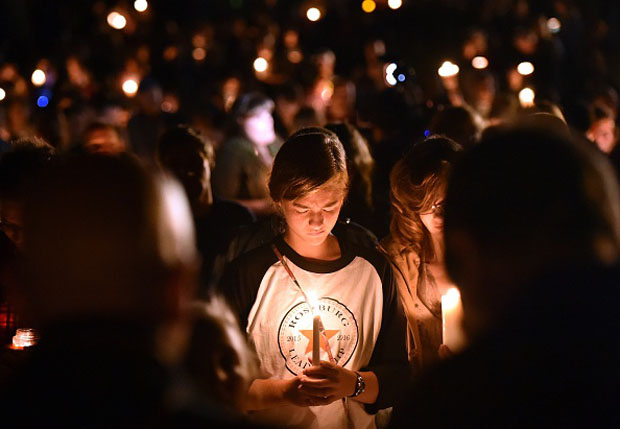 A girl prays during a vigil Oct. 1 in Roseburg, Oregon. Ten people were killed and seven others were wounded in a shooting at a community college. Josh Edelson/AFP/Getty Images

Nine people and a gunman are dead after a shooting at an Oregon community college. Once again, President Barack Obama expressed frustration that mass shootings have “become routine” in the U.S. Republican lawmakers and the White House gear up for long-term budget talks after Congress averts a government shutdown. House Majority Leader Kevin McCarthy tries to walk back his comments linking Hillary Clinton’s poll numbers to the House Benghazi investigation. The Vatican clarifies the Pope’s meeting with Kim Davis. And a disappointing September jobs report. A panel of journalists joins guest host Melissa Block of NPR News for analysis of the week’s top national news stories.

Video: Are We Becoming Numb To Gun Violence?

Video: Can Kevin McCarthy Rally The GOP To Get Things Done?

Our panel weighs in on what to expect from U.S. Rep Kevin McCarthy (R-Calif.), the presumed successor to House Speaker John Boehner.

Congress passed a last-minute bill this week that would temporarily fund the government through Dec. 11.”Are we just kicking the can down the road?” Guest host Melissa Block asked.

Are GOP Candidates Out Of Touch With Voters On Climate Change?

A new poll shows 56 percent of Republicans say they believe in climate change, and believe that humans have something to do with it. But many GOP candidates aren’t on the same page. Will it hurt them in the primary?