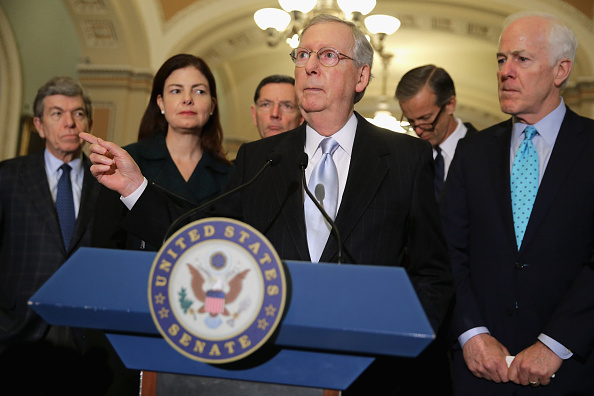 Senate Majority Leader Mitch McConnell (R-Ky.), center, and fellow GOP leaders talk to reporters on Tuesday. The Senate passed a defense authorization bill by a vote of 91-3, sending it back to President Obama with language that would make it hard for him to close the Guantanamo Bay prison before he leaves office in 2017. Chip Somodevilla/Getty Images

President Obama is expected to sign a $607 billion defense bill despite its ban on moving some prisoners from Guantanamo to U.S. prisons. The ban has prompted debate on whether the president will try to bypass Congress and close the military prison through executive action. The White House says it will ask the Supreme Court for a ruling on immigration reform. President Obama enlists former diplomats in his push to sell the Trans-Pacific Partnership trade deal. Republican presidential candidates spar over taxes, immigration, and wages in their latest debate. And the University of Missouri appoints a new interim president. A panel of journalists joins Diane for analysis of the week’s top national news stories.

'What Are You Going To Do About ISIS?'

The Obama Administration And Hispanic Voters

What's At Stake In The Democratic Debate?