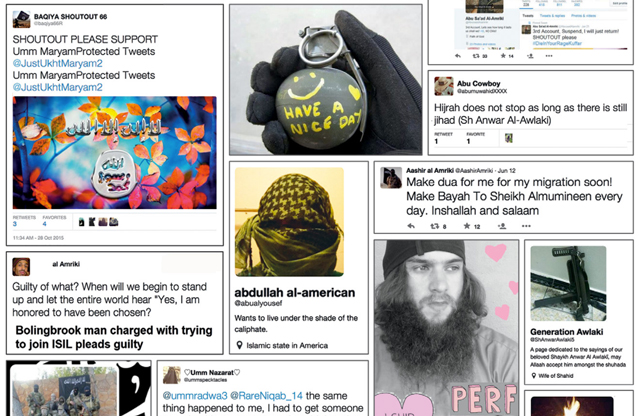 Social media posts collected by the authors of "ISIS in America: From Retweets to Raqqa," a study of "U.S. persons arrested, indicted, or convicted in the United States for ISIS-related activities," and of "ISIS-related mobilization in America." The Program on Extremism at George Washington University’s Center on Cyber & Homeland Security

Investigators are now saying the two people behind the San Bernardino shooting had been radicalized long before their killing spree. For many like them, social media can play a big role in that process. Sites like Facebook, Twitter and YouTube are now wrestling with how to identify material related to terrorism, and then what to do with what they find, toeing the line between upholding free speech on the web and removing dangerous or influential content. Both president Obama and presidential hopeful Hillary Clinton have recently called for increased cooperation between the government and these companies, which have shown reluctance in the past to wade deeper into this complicated issue. A conversation about how to deal with terrorist content on social media.