Negotiators In Paris Agree To A Landmark Climate Accord

Negotiators In Paris Agree To A Landmark Climate Accord 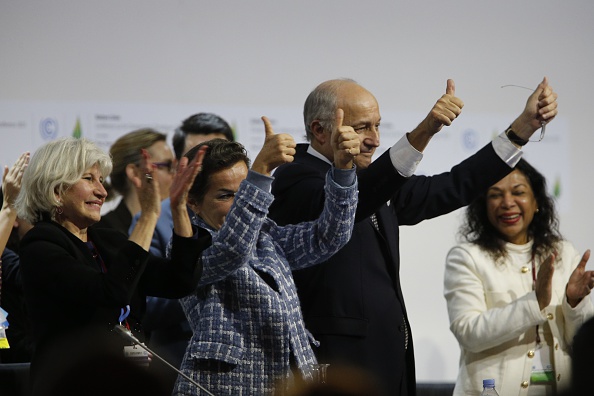 Thumbs are up at the close of the COP21 international climate negotiations on Saturday. Left to right: The French ambassador for the negotiations, Laurence Tubiana; the executive secretary of the U.N. Framework Convention on Climate Change, Christiana Figueres; and the French foreign affairs minister Laurent Fabius, who was president-designate of the conference. FRANCOIS GUILLOT/AFP/Getty Images

Nearly 200 nations approved a landmark climate accord over the weekend. They agreed to reduce greenhouse gas emissions and adopt other measures to limit the increase of the average global temperature. The deal hammered out over two weeks in Paris states that climate change represents “an urgent and potentially irreversible threat to human societies and the planet.” And it calls on all nations to take action to combat it. President Obama declared the Paris accord a victory for the planet, but warned against becoming complacent. Environmentalists agreed much more needs to be done. Join Diane in a discussion of the UN summit on climate change.