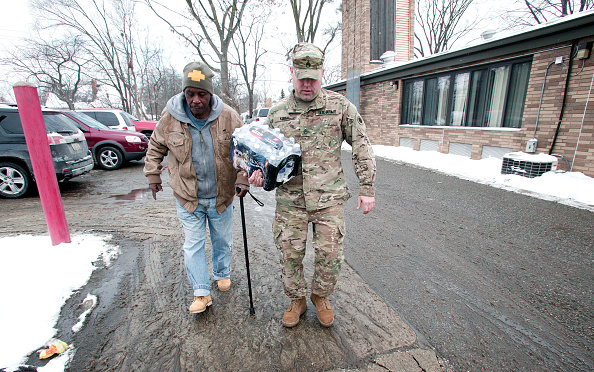 A member of the Michigan National Guard helps a Flint, Michigan, resident take bottled water out to his car after he received it at a fire station on Wednesday. Michigan's governor activited the National Guard in response to lead contamination in the city's water supply. Bill Pugliano/Getty Images

Donald Trump and Ted Cruz grab most of the attention at the first Republican debate of 2016. The two frontrunners ended their political détente, sparring over issues ranging from Cruz’s citizenship to Trump’s “New York values.” On the Democratic front, Hillary Clinton sharpens her attacks against Bernie Sanders as she loses ground in Iowa and New Hampshire. Congressional Republicans consider their agenda in a presidential election year. Anxiety over China’s economy and oil prices bring volatility to the U.S. stock market. The National Guard distributes water in Flint, Michigan. And President Obama delivers his final State of the Union address. A panel of journalists joins guest host Derek McGinty for analysis of the week’s top national news stories.