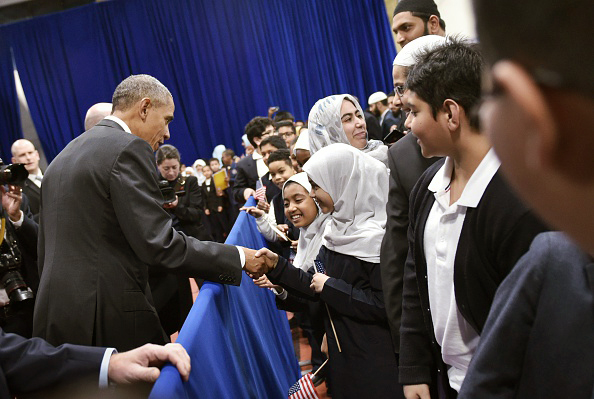 U.S. President Barack Obama greets attendees in an overflow room after speaking at the Islamic Society of Baltimore on February 3. Mandel Ngan/AFP/Getty Images

The Democratic presidential candidates hold their last debate before next week’s New Hampshire primary. Bernie Sanders and Hillary Clinton clashed over their progressive bonafides, campaign finance, and foreign policy. The U.S. unemployment rate ticks down to 4.9 percent — the first time it’s been below five percent eight years. President Obama promotes religious tolerance in his appearance at a mosque and at the National Prayer Breakfast. A bi-partisan energy bill in the U.S. Senate is held up by Democrats who want funding to address the water crisis in Flint, Michigan. And Florida declares a state of emergency in counties with the Zika virus. A panel of journalists joins guest host Tom Gjelten for analysis of the week’s top national news stories.