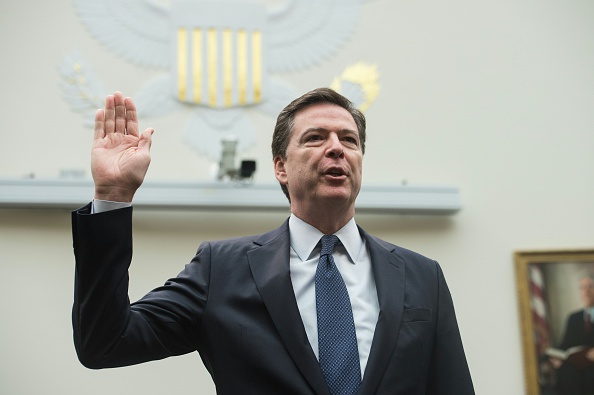 FBI director James Comey is sworn-in before giving testimony before the House Judiciary Committee on the encryption of the iPhone belonging to one of the San Bernardino attackers on Capitol Hill in Washington, DC, on March 1. Nicholas Kamm/AFP/Getty Images

Former G.O.P. presidential nominee Mitt Romney leads the charge of establishment Republicans against Donald Trump. In a speech yesterday, Romney sharply criticized the G.O.P. frontrunner and called for the party to rally around one of his rivals. The Justice Department grants immunity to a staffer who set up Hillary Clinton’s private email server. Republican senators meet with President Obama but don’t give ground on a hearing for his potential Supreme Court nominee. And the U.S. economy grew by 242,000 jobs in February, keeping the unemployment rate steady at 4.9 percent. A panel of journalists joins guest host Tom Gjelten for analysis of the week’s top national news stories.