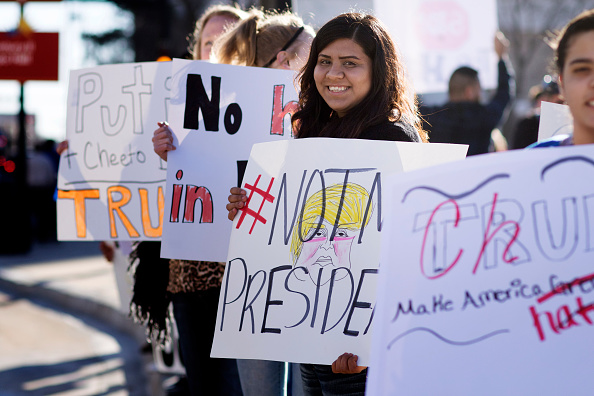 An anti-Trump protester stands outside the convention center where Republican presidential candidate Donald Trump made a speech at a campaign rally on March 5 in Wichita, Kansas. About 100 protesters voiced their opposition to Trump. J Pat Carter/Getty Images

The 12th Republican debate of the 2016 presidential campaign took on a more civil tone as the candidates face another round of crucial primaries. The Democratic candidates clash over trade and immigration in their debate a day after Bernie Sanders upset Hillary Clinton in the Michigan primary. Congressional lawmakers cross party lines to consider new sanctions after Iran conducts more missile tests. The Senate passes a bill to fight the U.S. opioid epidemic. And we remember former First Lady Nancy Reagan. A panel of journalists joins guest host Tom Gjelten for analysis of the week’s top national news stories.