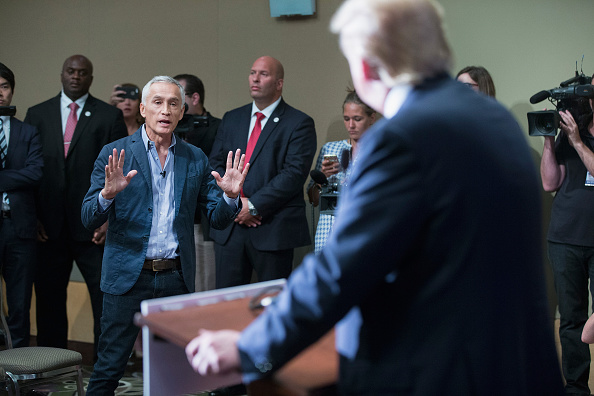 Univision and Fusion anchor Jorge Ramos asks Republican presidential candidate Donald Trump a question during a press conference on August 25, 2015 in Dubuque, Iowa. Earlier in the press conference Trump had Ramos removed from the room when he failed to yield when Trump wanted to take a question from a different reporter. Scott Olson/Getty Images

After years of reading the headlines on the nightly news, Jorge Ramos became a headline last summer when he challenged Donald Trump over his plan to deport illegal migrants — and got thrown out of a press conference. It was the first time many Americans heard of Ramos, but Latino audiences have known him for decades. Ramos anchors Univision’s nightly news with a viewership that rivals — and often beats — the English-language competition. Probably the most influential Latino journalist in the United States, he’s an outspoken critic of U.S. immigration policy and works on a project to get out the Latino vote. In a new book, he says reporters aren’t doing their duty if they don’t take a stand.

From TAKE A STAND: Lessons From Rebels by Jorge Ramos,  published by arrangement with Celebra, an imprint of Penguin Publishing Group, a division of Penguin Random House LLC. Copyright © 2016 by Jorge Ramos.