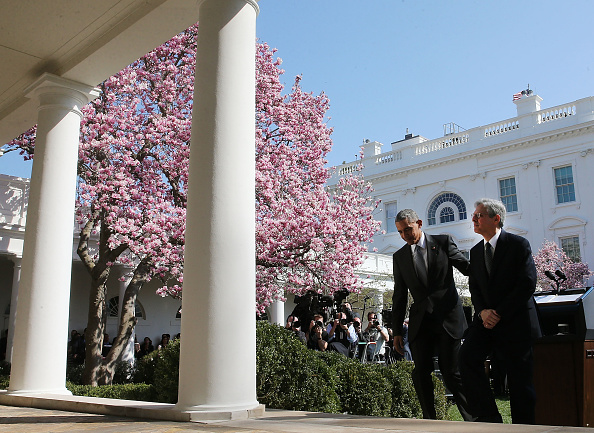 Judge Merrick B. Garland and President Barack Obama depart after Garland was nominated to the U.S. Supreme Court in the Rose Garden at the White House on March 16 in Washington, DC. Mark Wilson/Getty Images

President Obama names Merrick Garland as his nominee to the Supreme Court. But Senate Republicans refuse to meet with the appeals court judge as he began making rounds on Capitol Hill. Donald Trump and Hillary Clinton solidify their leads in the latest round of state presidential primaries. Trump warns Republican party leaders not to try to block his path to the nomination. Bernie Sanders prepares for the long haul despite news that President Obama thinks the Democratic party should soon unite behind a single candidate to replace him. And lawmakers call on Michigan Governor Rick Snyder and EPA administrator Gina McCarthy to resign over the Flint water crisis. A panel of journalists joins guest host Indira Lakshmanan for analysis of the week’s top national news stories.