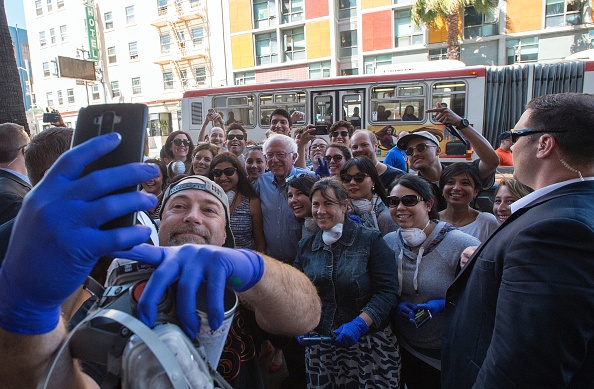 Democratic presidential candidate Bernie Sanders poses for a photo with a group of street artists during a walk through San Francisco, California on May 18. Josh Edelson/AFP/Getty Images

Bernie Sanders’ campaign rebukes Hillary Clinton for claiming she will be the Democratic nominee. Meanwhile, the Democratic Party establishment is making plans to avoid an ugly conflict at their convention in Philadelphia this summer. A new poll shows a majority of Republicans want their party to unify behind Donald Trump, who’s showing some signs of a more traditional candidacy. President Obama ties another non-decision from the Supreme Court to a lack of action on his nominee, Merrick Garland. And the federal government looks for ways to shorten long airport security lines. A panel of journalists joins guest host Allison Aubrey of NPR News for analysis of the week’s top national news stories.