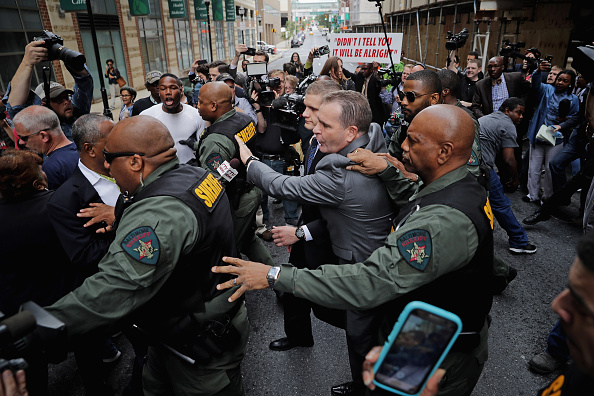 Baltimore City Sheriff's Deputies surround and protect Baltimore Police Officer Edward Nero's family members as demonstrators and members of the news media crowd around outside the Mitchell Courthouse-West after Nero was found not guilty on all charges against him related to the arrest and death of Freddie Gray May 23 in Baltimore, Maryland. Chip Somodevilla/Getty Images

Donald Trump hits the magic number – it appears he has enough pledged delegates to take the republican nomination. Bernie Sanders says he’s interested in debating the new presumptive G.O.P. nominee in California. After the State Department releases a report critical of Hillary Clinton’s private server, the Democratic frontrunner says voters have more important things to worry about in this election than her emails. Several states sue the Obama administration over its new transgender bathroom policy. South Carolina becomes the thirteenth state to ban abortions after twenty weeks. And the second Freddie Gray trial ends with a “not guilty” verdict. A panel of journalists joins guest host Sabri Ben-Achour for analysis of the week’s top national news stories.