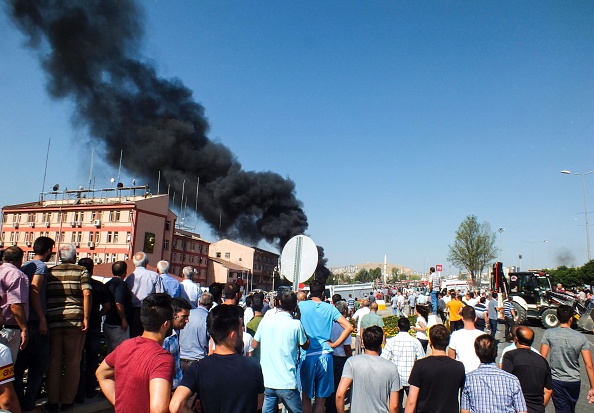 Early August 18, a car bomb blew up at police headquarters in the Turkish city of Elazig, killing five people (including three police) and injuring more than 200 people. The force of the blast left the building largely in ruins and turned nearby vehicles into blackened, mangled wrecks. STR/AFP/Getty Images

The State Department concedes a $400 million payment to Iran was delayed to add “leverage” for the release of three U.S. prisoners. Russia launches airstrikes on the Islamic State in Syria from a base in Iran. Officials investigate Donald Trump’s campaign chairman for financial ties to a pro-Russia party. The UN says it played a role in Haiti’s cholera epidemic. And Brazilian police accuse U.S. Olympic swimmers of fabricating a story about being robbed at gunpoint during the Rio games. A panel of journalists joins Diane for analysis of the week’s top international news stories.