The Rise Of Populism And Anti-Immigrant Sentiment In Europe

The Rise Of Populism And Anti-Immigrant Sentiment In Europe 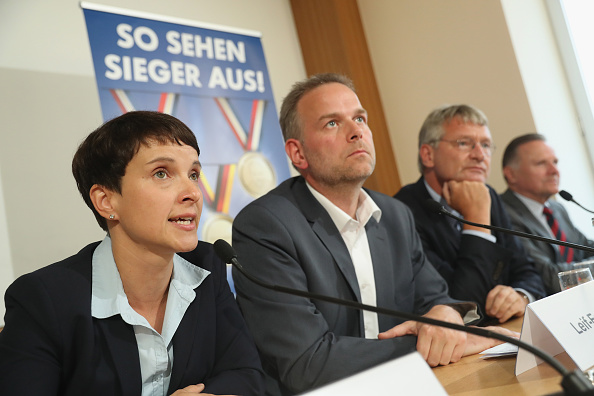 Representatives from Germany's Alternative fuer Deutschland (AfD) political party speak at a press conference under a banner that reads: 'This is what winners look like' on September 5 in Berlin, Germany. The AfD, a newcomer populist party, has managed to gain a strong following nationwide with an immigration-critical platform. Sean Gallup/Getty Images

Where there are earthquakes, there are often aftershocks—in geology as in politics. And if Britain’s vote early this summer to break away from Europe was an earthquake, a much smaller scale election in Germany this week represents a clear aftershock. For the first time in post-war history, Chancellor Angela Merkel’s party finished behind a populist challenger espousing strong anti-immigrant views in German state elections. The defeat comes a year after Merkel argued for compassion as she opened Germany’s borders to more than a million refugees from the Syrian civil war and North Africa. A panel joins guest host John Donvan to talk about what’s happened since then to tip populist anger, and why nationalism is gaining ground across Europe—from France to Denmark to Poland and the Netherlands—as other countries prepare for elections of their own.