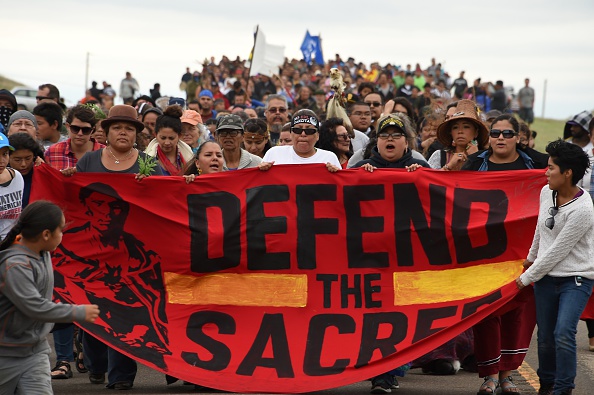 Native Americans march to a burial ground sacred site that was disturbed by bulldozers building the Dakota Access Pipeline (DAPL), near the encampment where hundreds of people have gathered to join the Standing Rock Sioux Tribe's protest of the oil pipeline that is slated to cross the Missouri River nearby, September 4 near Cannon Ball, North Dakota. Robyn Beck/AFP/Getty Images)

The Friday News Roundup: On the campaign trail, the spat of the week between Donald Trump and Hillary Clinton is who came out against the Iraq war when. Meanwhile, the polls show Clinton’s big lead is not quite so big as it was. The Senate fails to pass a bill that would provide 1.1 billion dollars to fight the Zika virus. The national guard arrives at the North Dakota pipeline protest ahead of an important court ruling. And after a violent Labor Day weekend, the number of homicides in Chicago this year surpasses the total number for 2015A panel of journalists joins guest host John Donvan for analysis of the week’s top national news stories.