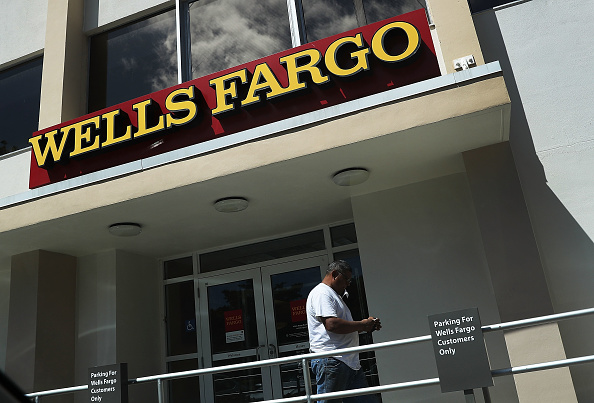 A Wells Fargo sign is seen on the exterior of one of their bank branches Sept. 9 in Miami, Florida. Reports indicate that more than 5,000 Wells Fargo employees have been fired as a result of a scandal involving employees that secretly set up new fake bank and credit card accounts in order to meet sales targets. Photo by Joe Raedle/Getty Images

New polling of likely voters shows Hillary Clinton and Donald Trump nearly tied in the presidential race – and indicates many voters believe electing either candidate would be risky for the country. Hillary Clinton gets back on the campaign trail after taking several days to recover from pneumonia, and both candidates release a doctor’s letter about their health. The Justice Department investigates Wells Fargo, after revelations the bank’s employees opened millions of fake bank accounts. And new Census Bureau data show middle class incomes saw the biggest jump in decades last year. A panel of journalists joins guest host A Martinez for analysis of the week’s top national news stories.