Latest On Syria: International Repercussions And The Future Of The Conflict

Latest On Syria: International Repercussions And The Future Of The Conflict 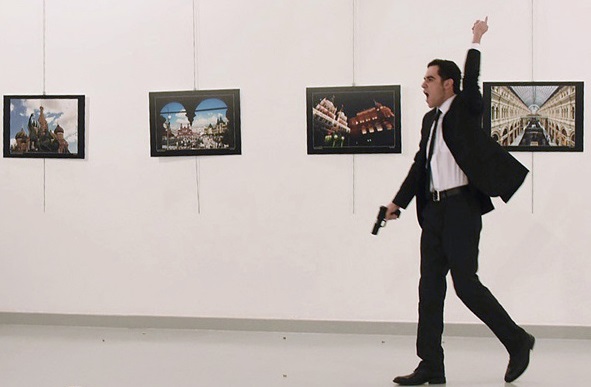 A picture taken on December 19, 2016 shows Mevlut Mert Altintas, the gunman who killed Russia's Ambassador to Turkey, in an attack during a public event in Ankara. YAVUZ ALATAN/AFP/Getty Images

“Don’t forget Aleppo, don’t forget Syria!” The gunman shouted these words after assassinating Russia’s ambassador to Turkey yesterday in Ankara. This as tens of thousands of people were being removed from besieged Aleppo. The U.N. yesterday passed a resolution to send observers to monitor the evacuation, which is still underway. Then last night, an attack on a Christmas market in Berlin renewed questions about German Chancellor Angela Merkel’s liberal policies toward refugees, many out of Syria. The latest on the conflict in Syria, its international repercussions, and the humanitarian situation on the ground.