Understanding The Conflict In Syria: A Look Back At Our Coverage 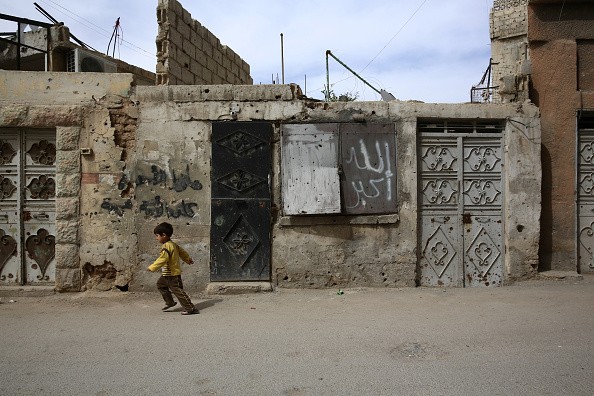 A Syrian boy walks in the al-Qaboun rebel-held northeastern suburb of the capital Damascus on March 13, 2016. One in three Syrian children have known nothing but a lifetime of war, UNICEF said, as the country's conflict enters its sixth year this week. Abd Doumany/AFP/Getty Images

Armed conflict in Syria has been ongoing for more than five years, and during that time, global leaders have struggled to understand its intricacies. If you’re looking for some context after our in-depth conversation from March 15, here are nine of our past shows covering the country’s civil war and related international affairs.

This week, as Russia bombs targets in the city of Aleppo, killing hundreds of people, tens of thousands flee the city. Turkey rejects demands to open its borders to refugees, but Secretary of State John Kerry meets with Russian Foreign Minister Sergey Lavrov and other world leaders in Munich to discuss a possible cease-fire agreement. Hear the full discussion.

French President François Hollande meets with President Barack Obama in Washington to seek additional U.S. support in the fight against ISIS in Syria, and NATO holds an emergency meeting over a Russian fighter jet downed by Turkey near its border with Syria. Listen to the conversation.

Even though peace talks have stalled, the Obama administration acknowledges a need to reassess policy toward Syria, as airstrikes against civilians are occurring with more frequency and refugees are straining already tapped resources in border countries. More information in the full hour.

After a chemical weapons attack in Syria kills more than a thousand people, Obama blames the Syrian government, then takes his case for a punishing counter-attack to Congress, to U.S. allies, and then eventually to the American people. What happened next, in the hour-long show.

Four rockets are fired into a Lebanon town near its border with Syria, three Lebanese border guards are killed by an unidentified gunman and three Lebanese civilians are killed by rocket fire. The attacks are thought to be related to Hezbollah’s support of the Syrian government. We discuss whether these attacks mean the conflict is widening, and how the U.S. government might respond.

Particularly harsh winter weather is making life worse for hundreds of thousands of Syrian refugees. Overburdened border nations, as well as aid groups, beg for more resources, but Syrian President Bashar al-Assad remains defiantly entrenched. Our conversation centers on the human side of the war.

Al-Assad goes on television for a rare interview, in which he says his country is facing a “regional and global war.” The conflict has been going on for nearly 18 months, and some are beginning to call it a civil war. The number of Syrians fleeing to border nations tripled from 1,000 to 3,000 per day over the preceding three months as the conflict deepened. Diane and guests talk about what these aspects of the conflict meant for the country’s future.

Concern is growing over the crackdown in Syria as security forces round up thousands of civilians and Turkey calls for an immediate end to the bloodshed. Hear the whole conversation.

In this show, two Middle East experts examine the internal and foreign policy challenges faced by al-Assad since he succeeded his father as president in 2000. Listen to the full hour.