The Latest on the Military, Political and Humanitarian Crises in Syria

The Latest on the Military, Political and Humanitarian Crises in Syria 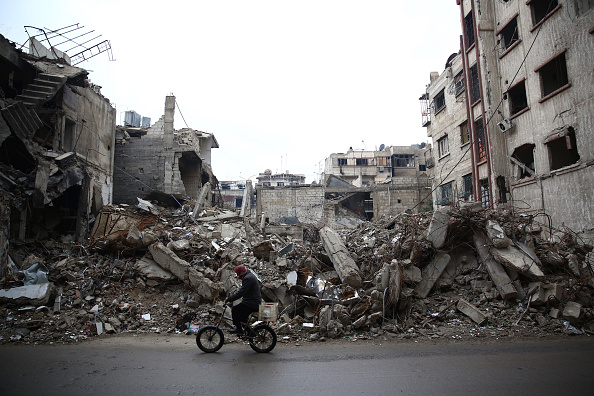 A man rides a bicycle past the rubble of a destroyed building in the rebel-held town of Douma, on the eastern edges of the Syrian capital Damascus, on January 5. Abd Doumany/AFP/Getty Images

The Syrian civil war has lasted five years and claimed more than 250,000 lives. More than 12 million Syrians have been forced to leave their homes as opposition forces battle the Assad regime. This week, the conflict has escalated with Russia bombing targets in the city of Aleppo, killing hundreds of people. Tens of thousands of civilians have fled the city. And yesterday Turkey rejected demands to open its borders to refugees. Today, Secretary of State Kerry meets with Russian Minister Lavrov and other world leaders in Munich to discuss a possible cease-fire agreement. Diane and guests discuss the latest on the political and humanitarian crises in Syria and prospects for peace.