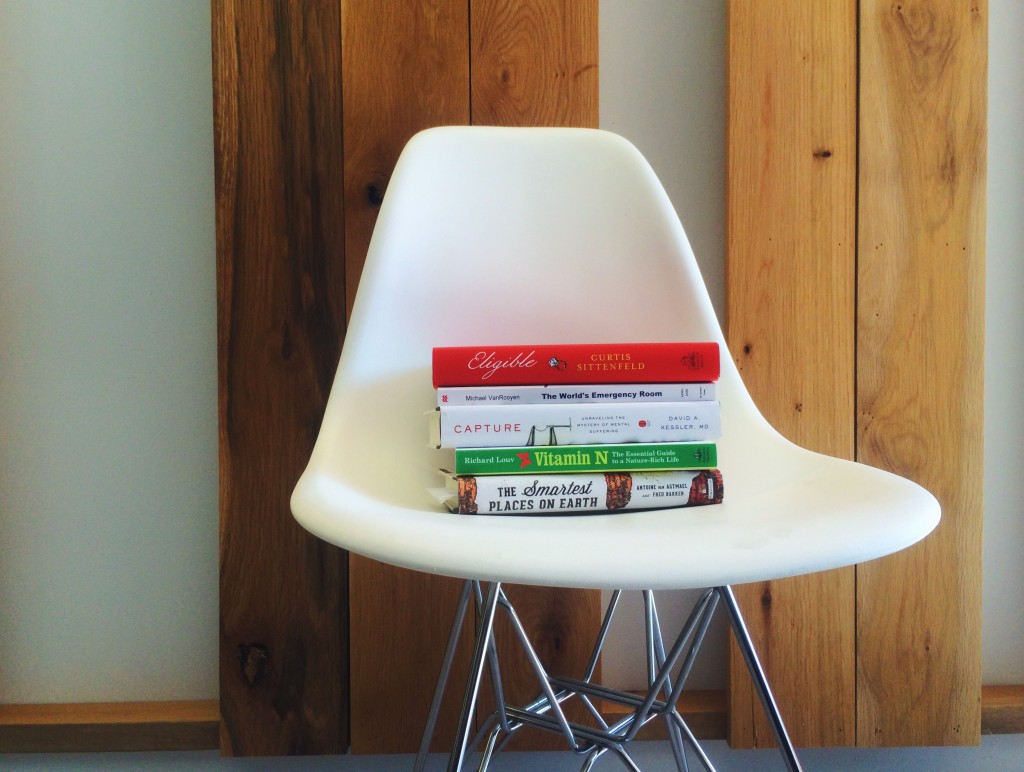 A selection of the books we'll be talking about in April. The Diane Rehm Show

Here’s what’s on tap for April:

Antoine Van Agtmael and Fred Bakker: “The Smartest Places On Earth: Why Rustbelts Are The Emerging Hotspots Of Global Innovation”
Research by an economist and a journalist points to a renaissance occurring in some Rust-Belt cities like Akron, Ohio, and Albany, New York. By focusing on how to make things in ways that are smarter, instead of cheaper, the authors say these areas are becoming “Brain Belts.”

Richard Louv: “Vitamin N: The Essential Guide to a Nature-Rich Life”
The journalist’s last book described the idea of “nature-deficit disorder” and outlined the benefits of engaging more frequently with the natural world; Now, he’s back with a book of helpful tips, inspirational essays and activities to do with your children.

David Kessler: “Capture: Unraveling The Mystery of Mental Suffering”
A former commissioner of the U.S. Food and Drug Administration argues that there is a neurological process underlying all mental suffering, from depression to addiction. His new book outlines his theory on the root cause of behavioral and emotional problems and what can be done about it.

Michael Puett And Christine Gross-Loh: “The Path: What Chinese Philosophers Can Teach Us About The Good Life”
The award-winning Harvard professor’s course on ancient Chinese philosophers is one of the university’s most popular — he says, because “the encounter with these ideas will change your life.” Now, in this new book, he’s spreading what he’s learned beyond the ivory tower.

Arianna Huffington: “The Sleep Revolution”
After a serious injury due to under-sleeping and over-working, the co-founder and editor-in-chief of The Huffington Post argues for a total overhaul of our relationship with sleep, and points to the many areas in which its value is being rediscovered, from education to politics.

Jeffrey Selingo: “There Is Life After College”
The former editor of the Chronicle of Higher Education, Washington Post columnist, best-selling education author and frequent commentator on our show offers his advice to college students how to best prepare to enter the “real world.”

Michael VanRooyen: “The World’s Emergency Room”
The director of the Harvard Humanitarian Initiative looks at the evolution of international humanitarian medicine, and how to stop the trend of violence against doctors and aid workers overseas.

Peggy Orenstein: “Girls And Sex”
Much news coverage in recent years has focused on casual sex on college campuses, but the journalist and best-selling author takes a deeper look this time at how we talk to young women about sex, and what these American girls learn as they grow up.

Curtis Sittenfeld: “Eligible”
A modern retelling of “Pride And Prejudice” by the New York Times best-selling author of “Prep” and “American Wife.”

Pamela Haag: “The Gunning of America”
The historian’s close examination of gun industry archives reveals how sales and marketing strategies created the idea that guns were a unique foundation of American identity.

Elizabeth Strout: “My Name Is Lucy Barton”
As a part of our Reader’s Review series, we’ll discuss the January release from the best-selling author of “Olive Kitteridge,” called an “exquisite novel” in its New York Times review. The book digs into a mother and daughter’s relationship through what they talk about during a long-past short hospital visit.