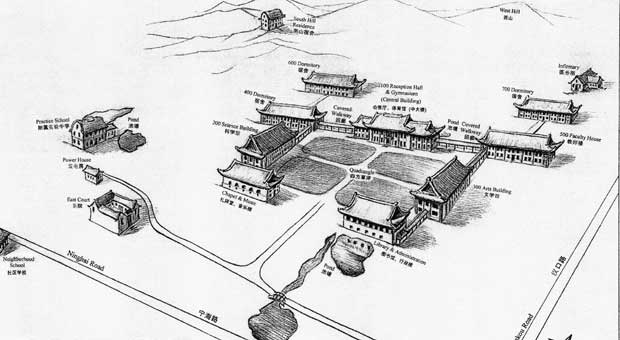 Minnie Vautrin was an American missionary and dean of the Jinling Women’s College in Nanjing during the japanese invasion in 1937. She opened the campus to more than 10,000 women and children and saved many Chinese lives. The people of Nanjing called her the Goddess of Mercy, but her regret over not saving more lives eventually led her to suicide. Many Chinese during and after the Cultural Revolution grew up unaware of the heroism of some Westerners during this tragic time in history. Award-winning Chinese-American author Ha Jin wants to put the record straight. He joins Diane to discuss his latest novel, “Nanjing Requiem.” A fictional account of Minnie Vautrin’s story, he says it’s an attempt to “put her soul in peace.”

Growing up in China during the Cultural Revolution, writer Ha Jin first heard of the Nanjing Massacre, but he did not become aware of the heroic role some westerners played until he read Iris Chang’s book “The Rape of Nanjing.” His latest novel centers on Minnie Vautrin, an American missionary who saved thousands of Chinese lives. In an introductory letter, Ha Jin writes, “she suffered and ruined herself by helping others, but she became a legend. At least her story has moved me to write a novel about her. If I succeed, my book might put her soul in peace.”

Giving Up on Writing the Book – Twice

Because Jin’s protagonist, Minnie Vautrin, was a real historical figure, Jin couldn’t invent any happenings for her as a character. He also struggled with creating enough narrative drive for the novel. He made many revisions – at least 30 – and when he sent the manuscript to his editor, he realized the book just didn’t gel. In the end, though, he saw the project through to publication.

Growing up in China During War Time

Jin didn’t have what he calls “a concrete picture of war,” but he has some vague memories. He recalls being taken to a mine in former Manchuria, the northeast region of the country, where he and others were shown a lot of bones. “The Japanese used a lot of miners to get coal, and so a lot of people died in those mines,” he said. He also saw some photographs detailing the Japanese soldiers’ brutality towards the Chinese, including some of naked women who he knows the soldiers raped and killed, their bodies mutilated.

Vautrin grew up in a poor family in Illinois. She graduated from the University of Illinois, and some missionaries who had just returned from China persuaded her to go there to educate Chinese girls. She started a girls’ school in China, taught for many years, and eventually became the dean of Jinling Women’s College. When the Japanese invasion happened in 1937, the campus was eventually used as a refugee camp, and Vautrin did everything she could to help the women and children there.”And she suffered a lot,” Jin said. “She was traumatized by it and eventually she had a breakdown…eventually she took her own life.”

Jin used some accounts from Japanese soldiers’ diaries to help create his story. “There are a lot of Japanese who really felt very guilty about this,” he said. Once the soldiers entered Nanjing, all order collapsed, and, Jin said, “all the evil was unleashed.” One soldier wrote in his diary that there was so much killing, the soldiers were having trouble finding clean water to drink because the water was red with blood. Some veteran Japanese soldiers have since traveled to Nanjing, to the museum of the massacre, to express their regret.