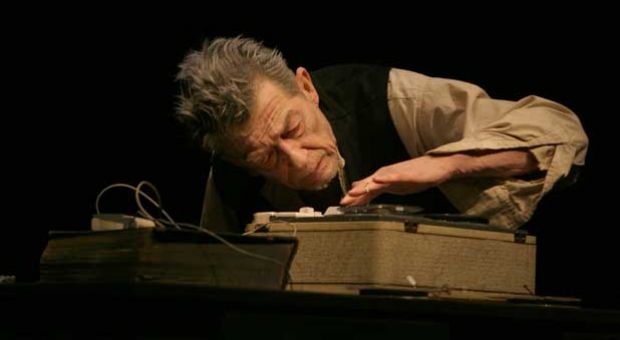 John Hurt has spent much of his career playing misfits and outsiders. Although he’s known for his well worn face, he’s also known for his very distinctively rich voice. Hurt has appeared in over a hundred films in his five decades long career. He’s received acclaim and awards for such films as “1984,” “The Elephant Man,” and “Midnight Express.” His work on the first and last “Harry Potter” as well as the “Hellboy” movies have brought him to a new audience. Hurt has also received acclaim for his work on the stage. He’s currently starring in a production of Samuel Beckett’s “Krapp’s Last Tape.” A conversation with legendary British actor John Hurt

Legendary British actor John Hurt is known for a well-worn face and a distinctive rich voice. He’s appeared in more than 100 films, among them “The Elephant Man,” “Hellboy,” “Love and Death on Long Island” and “Harry Potter.” Hurt is also a star of the theater. He made his London stage debut in 1962. He has most recently appeared on stage in a production of Samuel Beckett’s “Krapp’s Last Tape” presented by the Shakespeare Theater Company in Washington, D.C., with the production moving to New York shortly.

At Home on Stage

Hurt first took to the stage at age 9, where he felt “absolutely infused” with an understanding that he was in the right place. He hasn’t read all the reviews of his work during his long career, but he does remember a particularly negative one from The Daily Express for his performance during a Michael Codron play called “Little Malcolm and His Struggle Against the Eunuchs.” Spurred on by drunk castmates, Hurt wrote a note to the writer that just said, “Whoops, Yours Sincerely, John Hurt.” Weeks later, he received a note back from the writer that simply said, “Thank you for your short, but tedious, letter.” Hurt sent a note back saying, “You Win.”

Hurt’s role as Merrick in “The Elephant Man” involved so many hours of makeup before he could even begin shooting that he feared for a while he had come in to a situation that would make him not enjoy acting for the first time. But the film’s cast and crew, he said, were extraordinary, and he ended up having a great experience. In “Alien,” Hurt said there was a myth that began somehow that the other actors didn’t know what was going to happen. He said it was more a matter that they knew the alien was going to burst out of his chest, but they probably didn’t know how bloody and excruciating the whole scene was going to be. In the days before CGI, the props experts came up with a way to have a fake lower half of Hurt’s body, through which they actually pushed the alien.

Guest host Susan Page told Hurt she’d recently read an interview Hurt had done with The Guardian in which the writer had described Hurt’s voice as “nicotine sieved through dirty moonlit gravel.” To Hurt, the voice is a major part of any actor’s equipment. “I think you can create atmospheres with it,” he said. “It’s a musical instrument in a sense.”

One of Hurt’s own favorite films was “Love and Death on Long Island” made by Richard Kwietniowski. “With the reviews that we got, I thought that it would’ve been much, much more successful than it actually was,” he said. A method actor, Hurt said he almost passed on the recent BBC series “Caligula,” but was persuaded by a friend to change his mind. “It was a stunning time, terrific case,” he said.