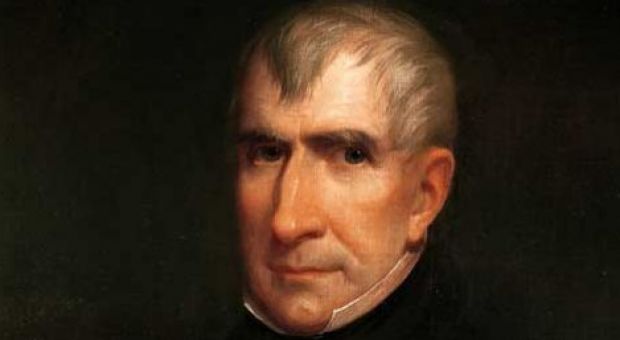 William Henry Harrison was the ninth American president. A war hero and master negotiator with Indian tribes, Harrison added 50 million acres to the fledgling United States. After retiring from the military, Harrison began a career in government to provide for his large family. His 1840 campaign for president featured catchy slogans and mass rallies, and cast the upper-class Virginian as a humble “log cabin” farmer. The spin worked: Harrison won in a landslide but then died of pneumonia after just one month in office. New York Times columnist Gail Collins on the shortest presidency in American history.

William Henry Harrison died of pneumonia just one month after taking office, so he’s mostly known for what he did not do. He never appointed a federal judge, and his wife never made it to the White House. But author and New York Times columnist Gail Collins says his Tippecanoe and Tyler Too campaign set the standard for modern presidential contests. In a new book titled “William Henry Harrison,” Gail Collins tells the story of the ninth president’s remarkable life and untimely death.

Harrison Was “Rather Wealthy”

Harrison was from Cincinnati, which is also Collins’ hometown. There, stories about Harrison centered on his supposedly humble beginnings and his life as a soldier. But Collins said the facts about Harrison’s life reveal that he was actually rather wealthy. His father had signed the Declaration of Independence, and the family lived in a big house – which Collins found out her own father had helped to tear down for the city. “So I kind of owe William Henry Harrison some little thing, I guess,” Collins said.

Harrison’s parents encouraged him to study medicine, but after his father’s death, he quit to join the army. At the time, the army didn’t have much prestige, and conditions were harsh. The Revolutionary War was over, and fighting Indians wasn’t considered to be as “manly and heroic” as fighting Englishmen had been. Morale was low and alcohol abuse was high amongst soldiers. But his experience fighting the Indians prepared him for his future job as the governor of Indiana, where he became an expert at writing treaties with small tribes of Indians that he then applied to all Indians within a certain territory.

When Harrison became president, he was 68 years old, which was very old for a new president at the time. He gave long speeches and went out often. His inaugural address was two hours long, and, Collins said, very boring. It was a rainy, cold day in March, and Harrison caught a bad cold. His doctors made things much worse – bleeding him, blistering him, and giving him strange medicine. His wife, who was settling things up at home, never even got to Washington before he died.

One of Harrison’s most important objectives during the campaign was for him to sell himself as a “common man” – not a rich guy from Virginia. It reminds Collins of Mitt Romney’s objective in this year’s campaign. “Although, to be honest, William Henry was much better at being one of the guys than Mitt Romney is,” Collins said.