The Dictionary of American Regional English

The Dictionary of American Regional English 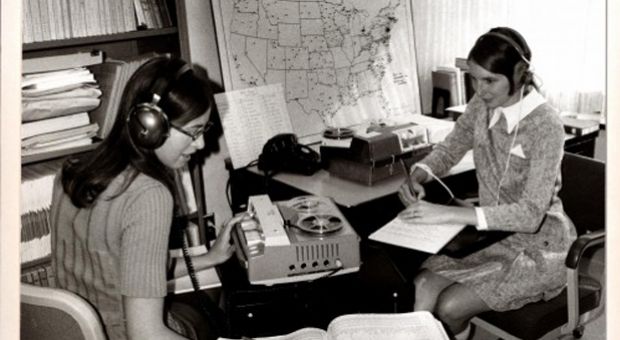 Beth Witherell and Jennifer Ellsworth, graduate students who worked on DARE, listen to one of the more than 1,800 audio recordings made in the field. Their job was to transcribe pronunciations in phonetics and select parts of conversations for examples of words to include in DARE. (Courtesy: UW-Madison Archives)

In Ohio, the strip of grass between the sidewalk and the curb is called a “tree lawn.” In other parts of the country, it is a “curb,” a “devil’s strip,” a “parkway,” a “swale,” or a “street lawn.” More than a dozen names for this can be found in the Dictionary of American Regional English. The fifth volume covers words and phrases from ‘slab’ to ‘zydeco’ and completes a fifty-year project to capture the unique ways people in different parts of the country speak. The dictionary has been used to solve crimes, teach medical students, train actors, and understand political candidates. Joan Hall, chief editor of the dictionary, and linguist Ben Zimmer join Diane to discuss the diversity of American language.

DARE in Photos: All photos courtesy of UW-Madison Archives and reprinted here by their permission. All rights reserved.

In the late 1960s, linguistic field workers were sat across the country in word wagons. They collected words and dialects from nearly 3,000 Americans across the country. Their recordings became the basis of a 50 year project called DARE, Dictionary of American Regional English. The 5th volume reaching Z has just become available.

“It’s a record of the way that we speak in the United States and it really puts together information about different words, different pronunciations in a way that no other reference work does. And so it’s invaluable in that way. And you can actually look at it as a kind of a social history of the United States by looking at the way that our lives change in different parts of the country. Because the speakers, for instance, that the linguistic field workers were talking to, way back in the ’60s, were often older speakers who were giving examples that could’ve dated back a 100 years ago,” Zimmer said.

The Significance Of “Arthur The Rat”

“When the field workers went to interview the informants in these 1,002 communities, they also asked each person to be recorded. But tape recorders were pretty new then, so some people were a little leery, but most people agreed to do it. They were asked to do two things, one was to read this silly little story called “Arthur the Rat” that was designed, not to make any sense, but to include all of the important sounds of American English. So by having people all over the country read the same passage, we have a wonderful database of comparison. So we can see how they sounded in New England and Central Atlantic and all across the country,” Hall said.

Zimmer said that some researchers are now using Twitter in their work because people often identify where they’re from in their tweets, which they can plot on maps similar to the ones DARE has produced in the past. “But instead of requiring all of this laborious fieldwork, we can just make these on the fly, if we’re interested. For instance, where do people say hella for instance? That’s an expression that young folks are familiar with these days as an adverb meaning very. Like if something is hella good,” he said.

Influential Areas Of the Country

“Over American history different parts of the country have had different kinds of prestige. And so if there’s a certain prestige associated with a certain part of the country, people will imitate that. So in the very early days, it might have been Boston, New York and that — so that patterns that were common there would then be picked up elsewhere. These days there could be different types of prestige. Among young speakers over the past couple of decades, southern California may be a prestigious variance of English for them,” Zimmer said.

You can read the [full transcript here(https://dianerehm.org/shows/2012-03-07/dictionary-american-regional-english/transcript).