Robert Caro: The Passage of Power: The Years of Lyndon Johnson

Robert Caro: The Passage of Power: The Years of Lyndon Johnson 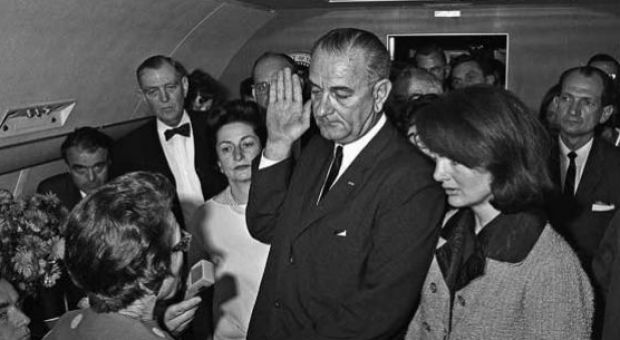 LBJ is sworn in on Air Force One, 1963 LBJ Library Cecil Stoughton

Pulitzer Prize-winning author Robert Caro has spent nearly four decades researching and writing about President Lyndon Johnson. His fourth book on the LBJ, “The Passage of Power,” follows Johnson from 1958 to 1964. Lyndon Johnson was perhaps the most powerful majority leader of the senate. Yet he found himself virtually irrelevant as vice-president in the Kennedy administration. At perhaps his lowest point, a shot changed everything and Johnson immediately took the reins as the thirty sixth president. Caro calls it, without a doubt, Johnson’s finest hour. Diane will talk to Caro about spending four decades researching and writing about the 36th U.S. President.

On November 22nd, 1963, Lyndon Johnson became the 36th president of the United States after President John Kennedy was assassinated in Dallas. Johnson had to reassure a shocked nation and use his political skills to push through Kennedy’s stalled agenda. Robert Caro, details all of this in his fourth book on LBJ. It’s titled “The Passage of Power.”

Johnson As A Senate Leader

In 1958, when Caro’s book begins, Johnson was the Senate majority leader. He was called the second most-powerful man in Washington at the time, after the president. “He runs the Senate as if it’s heis personal fiefdom,” Caro said. In 1960, he decided to run for president, but he got into the race very late. By the time he did, the young senator Jack Kennedy had already been racing around the country corralling delegates and votes. “Johnson doesn’t even realize that the nomination is being taken away from him,” Caro said.

The day JFK got the democratic nomination, he called Lyndon Johnson and asked if he could come to see him. When the two men met, JFK offered Johnson the vice presidency. “The rest of that day, Bobby Kennedy makes three trips down there to try to get Johnson to withdraw from the ticket,” Caro said. According to Caro, Bobby Kennedy had a real hatred toward Johnson. “Hatred is not too strong a word to describe the feelings between Lyndon Johnson and Bobby Kennedy,” he said. From the two men’s very first meeting, Bobby Kennedy took an instant dislike to Johnson in a way that was “just chemical,” Caro said.

The Surprise Of The Vice Presidency

Johnson had been an extremely powerful force in the senate, but as vice president, he was sorely disappointed at the lack of influence the position ended up holding for him. He had told people who had warned him that he would see his power diminish that “power is where power goes,” but that turned out not to be the reality for him. After JFK’s assassination, Johnson proved to be a resolute leader. It was Johnson who wanted Jackie Kennedy next to him as he took the oath of office. “He wanted it probably for a symbolic reason because it was an expression of continuity,” Caro said.

One Facebook fan asked Caro if Johnson had been worried that the public might think he had something to do with the assassination. Caro said he was, and that was the reason he appointed The Warren Commission. The Warren Commission was rushed, Caro said, but there is nothing in its findings that gave any single hint that Johnson had anything to do with the assassination.