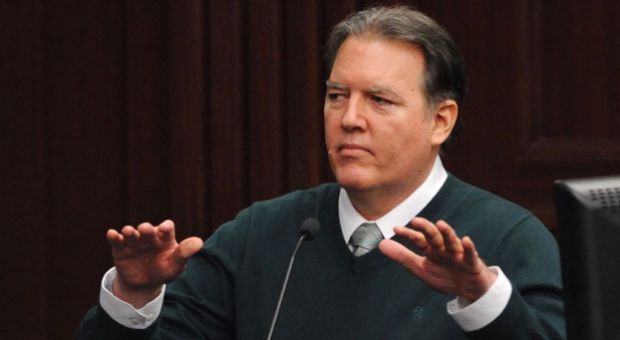 Michael Dunn, takes the stand in his own defense during his trial in Jacksonville, Fla., Tuesday, Feb. 11, 2014. Dunn is charged with fatally shooting 17-year-old Jordan Davis after an argument over loud music outside a Jacksonville, Fla. convenient story in 2012. (The Florida Times-Union, Bob Mack, Pool)

On Saturday, a Florida jury convicted Michael Dunn of attempted murder for shooting into a car full of African-American teens playing loud music. But the jury failed to reach a verdict on the most serious charge of first-degree murder in the death of 17-year-old Jordan Davis. Critics blame Florida’s expansive self-defense law for the hung jury, which contains the controversial stand-your-ground provision. And the verdict comes just six months after another Florida jury acquitted George Zimmerman in the death of Trayvon Martin. Diane and her guests discuss renewed debate over the jury’s verdict in the “loud music” trial and stand-your-ground laws across the country.