The Supreme Court Strikes Down Overall Limits On Campaign Contributions

The Supreme Court Strikes Down Overall Limits On Campaign Contributions 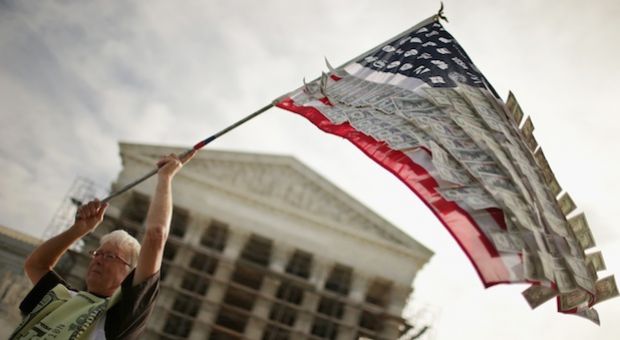 David Barrows, of Washington, DC, waves a flag with corporate logos and fake money during a rally against money in politics outside the Supreme Court October 8, 2013 in Washington, DC. On Tuesday, the Supreme Court heard oral arguments in McCutcheon v. Federal Election Committee, a first amendment case that will determine how much money an individual can contribute directly to political campaigns. (Photo by Chip Somodevilla/Getty Images)

The Supreme Court has struck down overall limits on federal campaign contributions for the first time. It’s considered, in some ways, a follow up to the Court’s Citizens United ruling four years ago. Like Citizens United, the decision is predicted to significantly increase the role of money in politics–an amount advocates for campaign finance reform say is already way too much. The case came down to a question of whether political contributions are protected by the First Amendment, and if capping them prevents corruption or the appearance of corruption. Diane and her guests discuss the new ruling and the role of money in political campaigns.