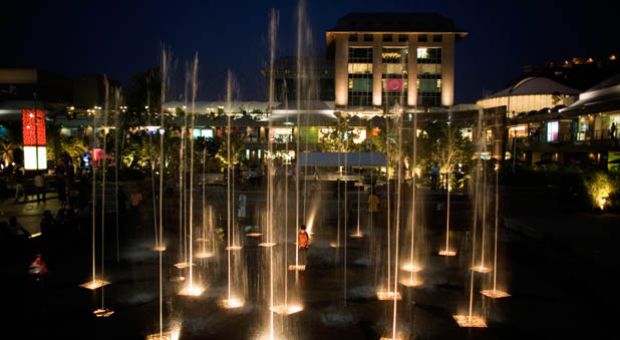 An Indian child plays in a water fountain at The Select Citywalk Mall in New Delhi on June 21, 2008. Delhi, the capital of India, is the site of seven principal cities built throughout the centuries by different rulers who came and conquered, establishing their presence with grandiose buildings, some of which lie in ruins amongst the sprawling urban mass that the city is today. As the nation carves out an increasingly significant role in the global economy, modern day Delhi is slowly being conquered once more as a new urban elite make their mark on the landscapes and lifestyles of the city. FINDLAY KEMBER/AFP/Getty Images

The largest election ever held in history is happening right now in India. More than 800 million people are registered to vote in the world’s most populous democracy. India has been going through dramatic political and social changes since it opened up its economy 20 years ago. It now has a sizable and growing middle class. The transformation has been particularly striking in Delhi, the nation’s capital. Slums were ripped down to make way for posh shopping malls and apartment buildings. In a new book, “Capital: The Eruption of Delhi,” Rana Dasgupta tells the stories of the billionaires, politicians and slum activists bound by the change gripping one of the world’s largest cities.