Debate over President Obama’s Use of Executive Orders

Debate over President Obama’s Use of Executive Orders 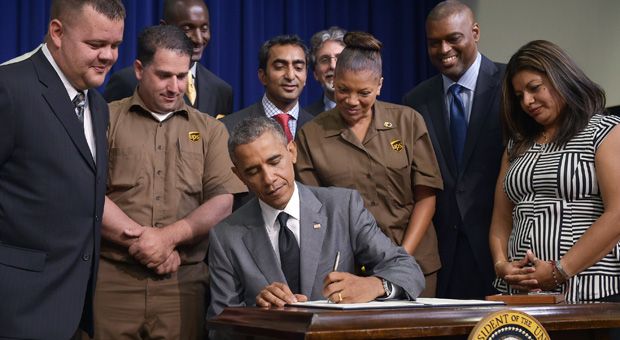 President Barack Obama signs the Fair Pay and Safe Workplace executive order on July 31, 2014 in the South Court Auditorium of the Eisenhower Executive Office Building, next to the White House in Washington, DC. MANDEL NGAN/AFP/Getty Images

American presidents have been issuing executive orders since the founding of the country. Abraham Lincoln issued an order to prevent a constitutional crisis. And years later, President Harry Truman used executive orders to integrate the armed forces and seize control of the nation’s steel mills. President George W. Bush issued nearly 300 executive orders while in office. So far, President Barack Obama has issued 184 executive orders covering a range of issues including health care, gay rights and immigration. Supporters argue executive action is necessary in the face of a gridlocked Congress. But critics say issuing too many executive orders violates the separation of powers in the Constitution and creates an “imperial presidency.” Diane and guests discuss the constitutionality of Obama’s executive orders and the political fallout from them.