The Growing Threat Of ISIS

The Growing Threat Of ISIS 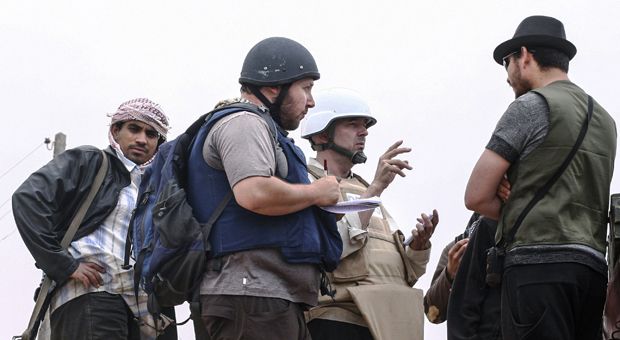 In this handout image made available by the photographer American journalist Steven Sotloff (Center with black helmet) talks to Libyan rebels on the Al Dafniya front line, 25 km west of Misrata on June 02, 2011 in Misrata, Libya. Sotloff was kidnapped in August 2013 near Aleppo, Syria. A video released Tuesday by ISIS claims to show Sotloff's execution. Etienne de Malglaive via Getty Images

The militant group Islamic State in Iraq and Syria released a video yesterday showing the execution of American journalist Steven Sotloff. U.S. intelligence officials confirmed the video’s authenticity early this morning. It’s the second beheading of a captured American journalist since the U.S. began airstrikes on Iraq on August 8th. In the video, a masked man with a British accent blames President Obama for what he calls an “arrogant foreign policy towards the Islamic State.” The White House announced yesterday it will send 350 additional troops to Iraq to protect diplomatic positions there. Diane and guests discuss the growing threat from ISIS and potential international response.