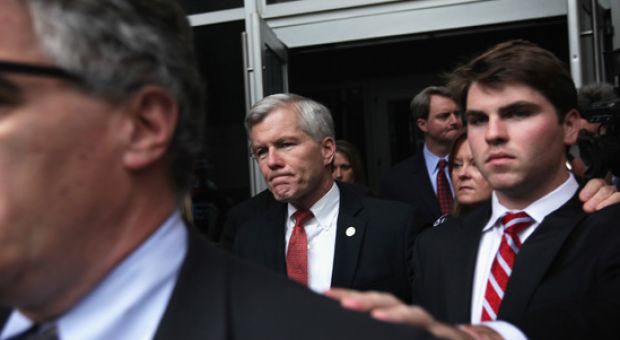 Former Virginia Governor Robert McDonnell (2nd R) leaves U.S. District Court for the Eastern District of Virginia with family members, including his son Bobby (R), after he found guilty in his corruption trial September 4, 2014, in Richmond, Virginia. The jury found McDonnell guilty of 11 corruption-related counts, and his wife Maureen McDonnell of eight counts. They were on trial for accepting gifts, vacations and loans from a Virginia businessman in exchange for helping his company. Alex Wong/Getty Images

The decision to convict former Virginia Gov. Bob McDonnell and his wife Maureen on corruption charges will likely have a far-reaching effect on politicians across the country as the verdict renews conversation about laws for political gifts.

The ruling should “send chills down the spines of lots of politicians,” Politico’s Manu Raju said Friday on The Diane Rehm show–including Texas Gov. Rick Perry, who is facing a corruption scandal of his own.

For Virginia, which had long maintained a reputation as a state with high ethical standards, McDonnell’s conviction could mean the “final fall of the Republican party” in the state, Bloomberg News’ Jeanne Cummings said.

For the full discussion, watch the video below.

Watch video of our panel discussing the week’s top US news.