Concerns Over Extremist Threats From Syria

Concerns Over Extremist Threats From Syria 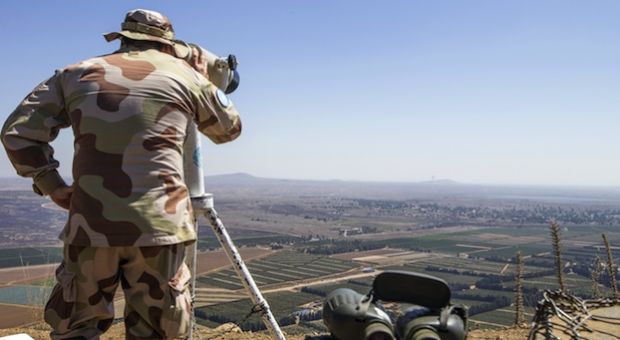 A European member of United Nations Disengagement Observer Force (UNDOF) uses binoculars to watch the Syrian side of the Golan Heights as he stands in the Israeli-occupied Golan Heights on September 5, 2014. Israel is closely monitoring the fighting between Syrian troops and Islamist rebels close to the armistice line on the Golan out of fear of a spillover of the internal conflict. Jack Guez/AFP/Getty Images

As many as 100,000 refugees have crossed into Turkey in the last three days, fleeing the violent onslaught of Islamic militants in Syria. With strikes against the group ISIS underway in Iraq since August, President Barack Obama has said he is ready to expand efforts into Syria. Yesterday, U.S. Ambassador to the U.N. Samantha Power suggested the United States has secured the allies it needs for a first wave of strikes. But now, newly-disclosed information suggests ISIS may not be the only extremist threat to the U.S. out of Syria, raising concerns that the American military focus is too limited. And questions remain about the long and expensive process of vetting and training moderate Syrian rebels in the fight on the ground. A look at the extremist threats from Syria, and next steps for the U.S.