Update On Civil Rights Protests In Ferguson, Mo., And Their Political Implications

Update On Civil Rights Protests In Ferguson, Mo., And Their Political Implications 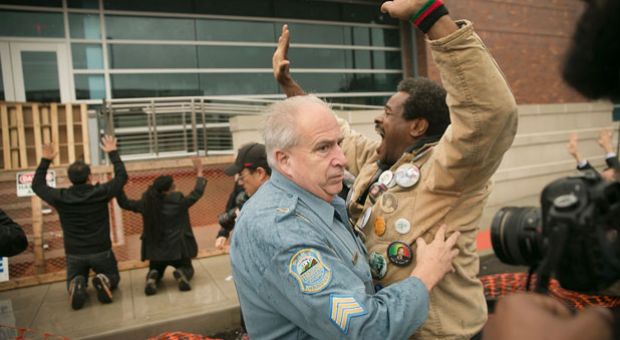 Demonstrators confront police outside the Ferguson police station on October 13, 2014 in Ferguson, Missouri. Ferguson has been struggling to heal since riots erupted following the August 9, killing of 18-year-old Michael Brown by a police officer in suburban Ferguson. Another teenager, Vonderrit Myers Jr., was killed by a St. Louis police officer on October 8. Several demonstrators and members of the clergy were arrested at the protest after a show of civil disobedience. (Scott Olson/Getty Images)

It’s been two months since a white police officer fatally shot Michael Brown, an unarmed, African-American teenager in Ferguson, Missouri. A grand jury is considering whether to bring charges against officer Darren Wilson. And last week, an off-duty police officer fatally shot a black teenager in the Shaw neighborhood of Saint Louis. This past weekend, thousands of protestors staged the largest and most organized demonstrations yet. They are calling for a change in police tactics and racial equity nationwide. Voter registrations are up in Saint Louis, but so far, the movement hasn’t led to national policy changes. An update on the civil rights protests in Ferguson, Missouri, and their political implications.