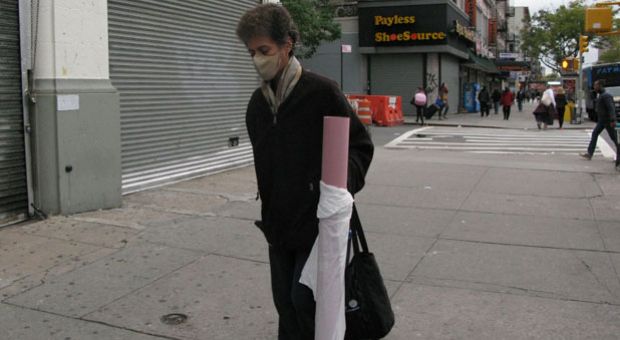 A pedestrian, wearing a mask, walks near the apartment building of Doctor Craig Spencer on October 24, 2014 in New York. Spencer, a member of Doctors Without Borders, who recently returned from treating Ebola patients in Guinea, the epicenter of the world's worst outbreak of the disease, tested positive for Ebola on October 23, making him the city's first Ebola patient. DON EMMERT/AFP/Getty Images

A doctor in New York City has been diagnosed with Ebola after returning from treating patients in Guinea. Federal health officials announce they will begin monitoring travelers from West Africa for 21 days after their arrival in the U.S. for signs of the virus. A massive airbag recall that could affect nearly eight million U.S. cars is announced this week, with at least two deaths blamed on the defect. This year is projected to have the most expensive midterm election ever, set to cost nearly $4 billion. And legendary Washington post editor Ben Bradlee dies at age 93. The domestic hour of the Friday news roundup.

But they seem to be working “better than ever,” Diane Rehm said during her domestic news hour Friday, particularly in states with Democratic candidates who have aligned themselves with President Barack Obama.

“[Attacks] stick with voters, a lot of whom aren’t researching things,” says John Dickerson, a chief political correspondent for Slate.com and a CBS political analyst and contributor.

“That’s the kind of regrettable state we’re at right now.”

The strategy could also affect voter turnout for those burned out on the attack cycle, the show’s panelists said.

Watch video of our panel as they discuss the week’s top headlines in studio.