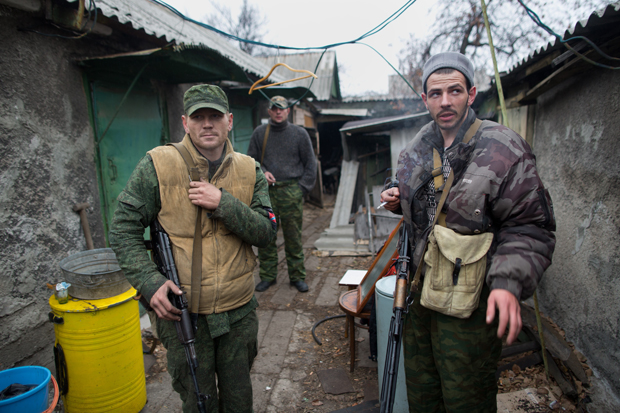 Pro-Russian gunmen pose at their house position in the North West Oktyaber neighbourhood of Donetsk on November 13, 2014, following recent days shelling near the destroyed airport in eastern Ukraine. International pressure on Russia was mounting Thursday over claims it is sending fresh military hardware into eastern Ukraine which could fuel a return to all-out conflict. MENAHEM KAHANA/AFP/Getty Images

The world reacts to the deal between China and the U.S. to cap greenhouse gas emissions. Obama meets with leaders in Myanmar and urges support for democracy. Tensions rise in Ukraine as NATO says Russian troops have crossed the border. Iraq’s new prime minister orders a shake up of his military command. Iraqi Kurds appeal for U.S. arms to combat Islamic State militants. Russia reaches a deal with Iran to construct nuclear power plants. And recent deaths of women in India shine a spotlight on controversial sterilization practices. A panel of journalists joins guest host Tom Gjelten for analysis of the week’s top international news stories.