Update on the West Coast Port Labor Dispute and Implications for the U.S. Economy

Update on the West Coast Port Labor Dispute and Implications for the U.S. Economy 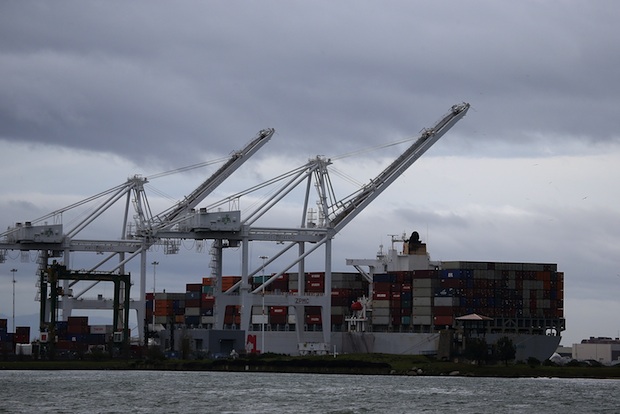 A container ship sits idle at the Port of Oakland on February 6, 2015 in Oakland, California. Pacific Maritime Association announced that terminal operators at 29 West Coast ports will be shutting down cargo operations amidst long labor negotiations with the International Longshore and Warehouse Union. Justin Sullivan/Getty Images

Nearly half the containers that come into the U.S. go through West Coast ports. Giant ships bring cars, electronics and clothing in a surging trade with Asia that has tripled traffic at these 29 gateways. Now, a labor dispute between dockworkers and shipping companies threatens to shut down the ports. Some economists estimate this would cost the U.S. economy $2 billion a day. President Barack Obama has sent Labor Secretary Thomas Perez to San Francisco this week to try to broker a deal. But the two sides remain deadlocked. Diane and guests discuss what’s behind the West Coast port slowdown and what it could mean for the U.S. economy.