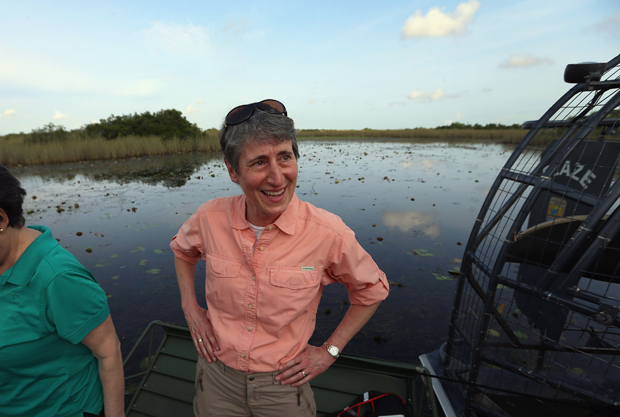 In this May 2013 picture, Secretary of the Interior Sally Jewell vists the Arthur R. Marshall Loxahatchee National Wildlife Refuge in the Florida Everglades. Photo by Joe Raedle/Getty Images

Sally Jewell became Secretary of the Department of Interior in April 2013. A former engineer and later CEO of outdoor gear retailer REI, Jewell brought business acumen to an agency that oversees 400 national parks and nearly 300 million acres of federal lands. During her tenure, Jewell has launched several partnerships with businesses like American Express and North Face apparel for a conservation service corps aimed at youth and veterans. And in a recent speech, she outlined ambitious priorities for her final two years. These include modernizing the federal coal program and tougher standards for oil and gas production. We talk about the future with U.S. Department of Interior Secretary Sally Jewell.