The 2016 Presidential Race: A Conversation With Democratic Candidate And Vermont Senator Bernie Sanders

The 2016 Presidential Race: A Conversation With Democratic Candidate And Vermont Senator Bernie Sanders 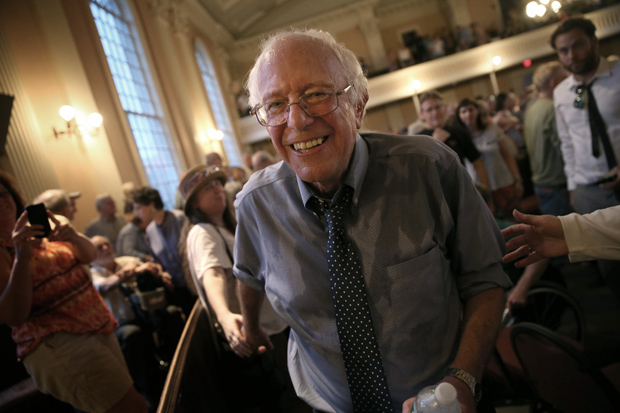 U.S. Sen. Bernie Sanders (I-Vt) represents a small state, but has drawn large crowds since he announced his candidacy for president this spring. Former Secretary Of State Hillary Clinton has a huge lead over Sanders in national polls. Yet Sanders has done very well in straw polls in several states. His position has been consistent over the decades: A champion of the poor and middle class and a critic of corporate and political greed. Whether that will resonate with enough voters or move other candidates to adopt more progressive positions remains to be seen. But for now, Sanders is a contender. He sits down with us to talk about his run for the White House.

An Apology From Diane

On yesterday’s show, I raised the issue of dual citizenship with Senator and Presidential Candidate Bernie Sanders. This is an issue that has come up over the years in American politics. One of our listeners suggested via our Facebook page that I ask Senator Sanders about Internet speculation that he has dual citizenship with Israel.

But instead of asking it as a question I stated it as fact. That was wrong. He does NOT have dual citizenship and Senator Sanders immediately corrected me. I should have explained to him and to you why I felt this was a relevant question and something he might like to address. I apologize to Senator Sanders and to you for having made an erroneous statement. However, I am glad to play a role in putting this rumor to rest.

U.S. Sen. Bernie Sanders (I-Vt) talks about what he would do about social security if he won the 2016 presidential race.

“No president … is going to be able to accomplish what the middle class needs unless there is a mass movement,” U.S. Sen Bernie Sanders said of the Affordable Care Act and changes in health care.

“I want to make sure that women have that choice” to get an abortion, U.S. Sen. Bernie Sanders says.

U.S. Sen Bernie Sanders weighs in on U.S. strategy against ISIS and more broadly in the Middle East, and what he would do (or not) to change it.

U.S. Sen. Bernie Sanders (I-Vt) responds to a caller asking about his stance on immigration.